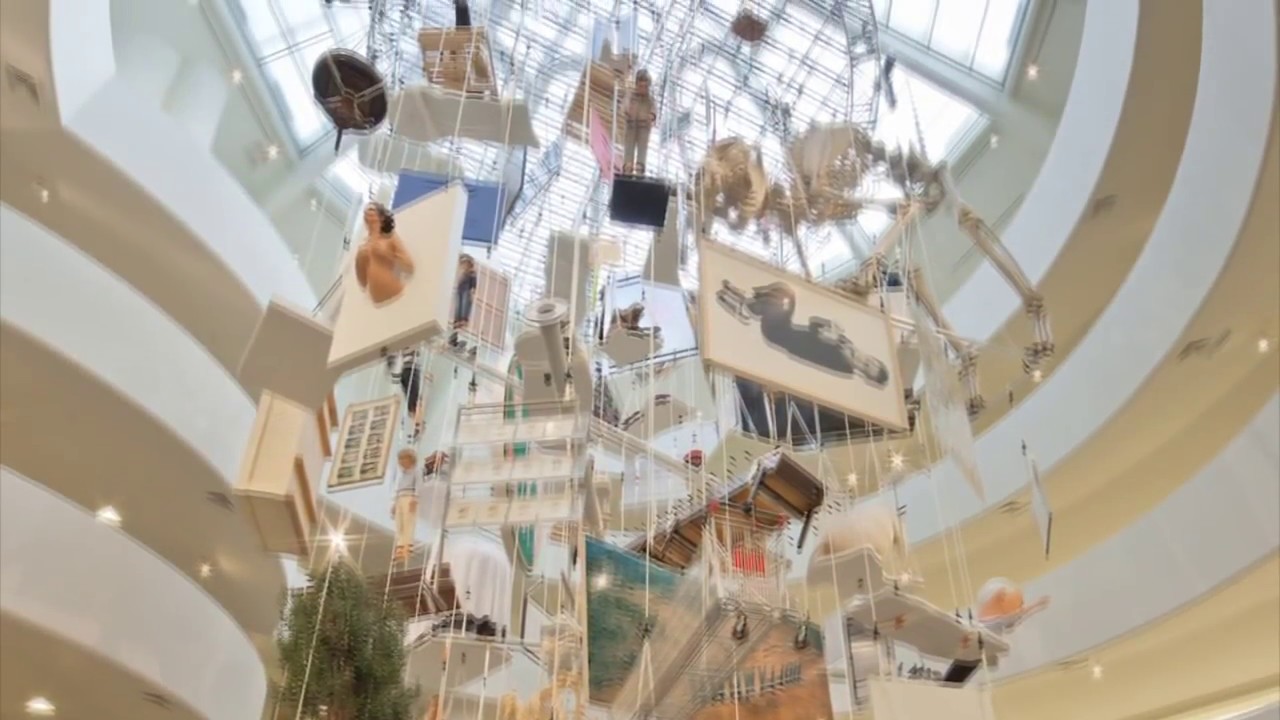 Hailed simultaneously as a provocateur, prankster, and tragic poet of our times, Maurizio Cattelan has created some of the most unforgettable images in recent contemporary art. His source materials range widely, from popular culture, history, and organized religion to a meditation on the self that is at once humorous and profound. Working in a vein that can be described as hyperrealist, Cattelan creates unsettlingly veristic sculptures that reveal contradictions at the core of today’s society. While bold and irreverent, the work is also deadly serious in its scathing critique of authority and the abuse of power.

Cattelan’s youth in the Italian city of Padua was marked by economic hardship at home, punishment at school, and a string of unfulfilling, menial jobs. These early experiences instilled in him an abiding mistrust of authority and a disdain for the drudgery of labor that haunts much of his early production. He describes his work from the late 1980s and early 1990s as being “about the impossibility of doing something…about insecurity, about failure.” His pronounced anxiety about not succeeding was manifested in a series of performative escape routes from his artistic obligations. Bereft of ideas for his first solo exhibition in 1989, Cattelan simply closed the gallery and hung up a sign reading Torno subito, or “Be back soon.” His early contributions to group shows were equally delinquent: in 1992, his participation in an exhibition at the Castello di Rivara near Turin consisted of a rope of knotted bed sheets dangling from an open window (Una Domenica a Rivara [A Sunday in Rivara]), while his response to the pressure of exhibiting at the Venice Biennale was to lease his allotted space to an advertising agency, which installed a billboard promoting a new perfume (Working Is a Bad Job, 1993).

Cattelan’s disruptive and disrespectful gestures have at times taken the form of creative theft and even overtly criminal activity. For an exhibition at the de Appel arts center in Amsterdam, he stole the entire contents of another artist’s show from a nearby gallery with the idea of passing it off as his own work (Another Fucking Readymade, 1996), until the police insisted he return the loot on threat of arrest. Cattelan’s anarchist streak extends to works that revolve around issues of his Italian identity and the tensions of the country’s ever-shifting political landscape. In response to a wave of xenophobic sentiment, he formed a soccer team composed entirely of North African immigrants who played in both outdoor competitions and in exhibition settings on an elongated foosball table (Stadium, 1991). Their uniforms bore the emblem Rauss, which recalled the Nazi phrase Juden raus, or “Jews get out.”

We are the revolution, Maurizio Cattelan.

Cattelan has also turned to his own distinctive features as a mainstay of his iconography, constructing a series of sculptural vignettes that promote his image as an Everyman, playing the part of the fool so that we don’t have to. Notable examples include La Rivoluzione siamo noi (We are the revolution, 2000), which presents a diminutive Cattelan dangling by his collar from a metal coat rack, impudently dressed in the signature felt suit of German artist Joseph Beuys, and a 2001 installation created for the Museum Boijmans Van Beuningen in Rotterdam that depicts the artist peering mischievously from a hole in the floor at a gallery of Old Master paintings (Untitled, 2001). Some of Cattelan’s surrogates have been more allusive, such as the 2008 work Daddy Daddy, an installation first shown in the fountain on the Guggenheim’s rotunda floor, that depicts the puppet Pinocchio—another rebellious Italian boy with an oversized nose—floating facedown as if the victim of a tragic tumble from the ramps above.

Although an ironic humor threads much of his work, a profound meditation on mortality forms the core of Cattelan’s practice. His recurring use of taxidermy, which presents a state of apparent life premised on actual death, is particularly apt for exploring this thematic concern. Perhaps the most poignant of his anthropomorphic animal scenes is Bidibidobidiboo (1996), in which a despairing squirrel has committed suicide in his grimy kitchen.

Death stalks the artist’s psyche and creeps into all manifestations of his production. With All (2007), he created what he described as a “monument to death,” a sculpture that would commemorate its unrelenting presence. Derived from ubiquitous media imagery of fallen bodies, and carved from traditional marble, the nine shrouded figures appear as victims of some unnamed trauma, silently recalling the unconscionable realities of our present-day world.
Among Cattelan’s most startling projects is a cycle of lifelike waxworks that portray and contest iconic authority figures. The most incendiary of these works comprise La Nona Ora (The ninth hour, 1999), his notorious sculpture of Pope John Paul II felled by a meteorite, and Him (2001), a rendering of Adolf Hitler in the scale of a young boy, kneeling preposterously in a pose of supplication. Also included is the sculpture Frank and Jamie (2002), in which two New York City policemen are turned upside down and propped against a wall in a posture that has been interpreted as a visual parallel to the sense of vulnerability that permeated the country in the wake of the terrorist attacks of September 11, 2001. A more overtly elegiac scene is constructed by Now (2004), an effigy of a serene and barefoot John F. Kennedy lying in state, a martyr to a shattered American idealism seen from the perspective of a disillusioned present.

Cattelan’s career resists summation by any traditional exhibition format. Many of his early, action-based meditations on failure would be impossible to reconstruct, and his singular, iconic objects function best in isolation. Maurizio Cattelan: All is thus a full-scale admission of the inadvisability of viewing his work in the context of a conventional chronological retrospective. Characteristically, the artist resisted this model, creating instead a site-specific installation that cunningly celebrates its rebelliousness. The exhibition brings together virtually everything the artist has produced since 1989 and presents the works en masse, strung seemingly haphazardly from the oculus of the Guggenheim’s rotunda. Perversely encapsulating Cattelan’s career to date in an overly literal, three-dimensional catalogue raisonné, the installation lampoons the idea of comprehensiveness.

The exhibition is an exercise in disrespect: the artist has hung up his work like laundry to dry. Like all of his individual objects, the new installation resonates with multiple interpretive valences. Cattelan has certainly used the motif of suspension before, most notably in the poetically elongated sculpture created from a taxidermied horse, Novecento (20th century, 1997), but here it takes on epic proportions. Hoisted by rope as if on a gallows, the objects explicitly reveal the undertone of death that pervades the artist’s work. In total, the installation looks like a mass execution, and constitutes, for its duration, an overarching, tragic artwork in its own right.